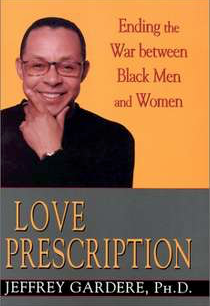 Love Prescription:Healing the War Between Black Men and Women

Excerpt from CHAPTER ONE: “Post-Traumatic Slavery Disorder: The War Begins”

“I believe that most of our brothers are still insecure about themselves because of our past history,” a male client named Raymond once observed.

He’d come to me after his second marriage failed. After several months of counseling, he was finally recognizing how his own thought and behavior patterns had played a role in destroying his relationships.

“Our insecurity makes it hard for us to face the truth about ourselves,” Raymond said of black men in general. “A lot of us are not able to deal with strong women. Black women put up with less crap than other women, and black women speak their minds, whether you like it or not. If you’re secure, you should be able to listen to what is being said and evaluate whether or not it applies to you. But we are still too insecure to do that.”

Many authorities on African-American history and culture agree with Raymond. These scholars go even further to link many of the destructive ways in which we relate to each other with our history as slaves and colonized peoples.

Slavery made it nearly impossible for us to form lasting and healthy relationships in the past. The problem is that when it comes to getting together for the long-term these days, too many of us still act as if the slave master were standing over us with a whip. These carryover mental and behavior patterns and all the other lingering after-effects of slavery can be described as Post-Traumatic Slavery Disorder, or our PTSD. Every crack of the whip and other cruel acts perpetrated by the slave master forced us to react, emotionally and behaviorally, in ways to protect our sanity, our dignity, and our very lives. Sadly, those emotional and behavioral coping mechanisms have become ingrained over time, even though many of these patterns of thinking and acting no longer serve our interests.

I also believe our PTSD is so prevalent and destructive to our collective mental and physical health that it should be officially recognized as a valid psychological disturbance by the same mainstream institutions that acknowledge post-traumatic stress disorder as a condition requiring treatment. We also need to acknowledge our PTSD and do something about it ourselves.

The conventionally recognized condition known as post-traumatic stress disorder is described by the Diagnostic and Statistical Manual-IV Revised--the Bible for diagnosing all mental health disease--as both an emotional condition and a set of destructive, dysfunctional behaviors resulting from exposure to a traumatic event over which one has little or no control, such as a car, plane, or train accident, a mugging or rape, or any event that is unexpected and outside the usual human experience.

Symptoms include anxiety, comma, flashbacks to the event, avoidance of similar situations, nightmares and other sleeping disorders, eating disorders, and paranoia. In many ways, some of these symptoms are ways in which we cope with the trauma, even though these symptoms may be dysfunctional. These behaviors are all we have to get us through, but they don’t really help, and most of the time, a person suffering from post-traumatic stress disorder needs professional counseling.

Post-Traumatic Slavery Disorder fulfills that definition. In fact, Post Traumatic Slavery Disorder differs from post-traumatic stress disorder only in that our PTSD refers to a single, specific trauma--that of slavery. That trauma persisted for centuries and was experienced by an entire race! The trauma visited upon us by slavery and colonialism created not only post-traumatic stress disorder symptoms, but also shame, degradation, and self-hate.

Imagine the emotional upheaval of being forcibly removed from our land, communities, and families in Africa, and then virtually imprisoned in foreign countries, including America, where we endured brutal and horrific conditions for entire lifetimes. How could we ever recover simply by the passage of time? We haven’t recovered. We still suffer from that trauma today, and no aspect of our collective lives as African-Americans expresses the devastating effects of our PTSD more dramatically than our male-female relationships.

The damage caused by the extreme and long-lasting injury of slavery goes too wide and too deep even to measure. Our PTSD affects virtually every person of color whose history was blighted by slavery and colonialism. The danger is that if we do not exorcise the trauma of our PTSD so it no longer contaminates our hearts, minds, and souls, we are doomed to act out our buried anger and pain through endless negative and dysfunctional relationships, especially with each other. Without question, Post-Traumatic Slavery Disorder is at the root of the current battling between black men and women.

We Were Bred Like Animals
From the moment the very first slave was hauled in chains onto the auction block, black men understood that commitment to a woman could bring nothing but heartache and trouble, and black women realized that they could not count on their men. The black man simply did not have the power to protect his woman and children. During slavery, black men and women were not allowed to create lasting partnerships and families. Instead, Africans were bred like prize animals, according to the whims and labor requirements of the slave master. Those slaves who did fall in love and form family units often experienced the pain of seeing them torn apart as children, mothers, and fathers were sold off to distant plantations, with little hope of ever meeting again.

Commitment Meant Trouble
The slave master could force himself sexually on a female slave--the mother of a male slave’s children-- any time he pleased. And if a black man allowed himself to experience love for a female slave, that love bound both of them to the plantation for life, defeating any motivation for escape.

Remaining emotionally and physically distant and taking on many lovers--that is, ensuring that love and commitment had nothing to do with it--was the black man’s only possible psychological and behavioral defense against the certain prospect of emotional pain.

As for the black woman, her best shot at survival was dampening her own emotions and giving in to the whims of the slave master. The only way she could hope for a measure of control over her destiny was through strategic psychology, including turning her rape into a seduction and currying the slave master’s favor for her children, herself, and her real man.

What man could ever understand and accept that sacrifice? What man would not misinterpret his woman’s defense maneuver as collusion with the enemy? And what woman could ever truly accept that her man had allowed her to become a slave in the first place?

Thus were planted the seeds of distrust between black men and women.

We Were Less Than Human
For hundreds of years, we were told by the dominant society that we were not fully human. At one point, we were even counted in the official census as 3/4 of a human! In fact, the only way we could gain self-esteem was through fulfilling the slave master’s demands--by being good workers and good breeders who produced as many new slaves as possible. If you are told something about yourself many times over a lengthy period of time, you inevitably take in that message about who you are and what you're worth. That’s how we were brainwashed. We internalized the slave master’s degrading view of us as less than human and came to view ourselves as inferior. Once we’d absorbed that destructive view of ourselves as individuals and as a race, our behavior came to reflect that perception.

Many of us also bought into the master as our father figure and the notion that we, as obedient children, had to please him. This is a common psychological phenomenon known as the Stockholm syndrome, in which a kidnapped or oppressed person learns to depend on his or her captor for survival.

Buried Wounds
Our slavery-induced low self esteem keeps us in emotional shackles because we are still repeating the same negative behaviors we evolved in order to cope with that self-image problem. Why? Because we haven’t fully accepted where our negative self-image and behavior patterns come from and what we are doing to keep that negativity going. As a people, we have never made a concerted effort to understand and heal slavery’s destructive effects on our relationships. No wonder we can’t get along!

Only when we can free ourselves of our PTSD and our negative self-images and stereotypes, as well as the anger, pain, and fear these self-concepts create, will we finally be able to come together in love.
You may object that slavery days have been done and gone for over two and half centuries. Whenever I give talks and workshops on relationships, I can count on someone to say, “Isn’t it time for black men and women to get over it and clean up their acts? How can what happened so long ago during slavery still affect how we relate to each other today? PTSD is just some psychobabble excuse for tired behavior with each other!”

True, slavery is over in America, but we have yet to get over it. The experience lives on in our bodies, hearts, minds, and souls, and the racism we experience every day helps keep the trauma alive and tear our families apart.